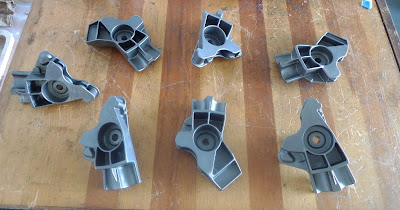 There's something about getting a box of parts made using a technique that you cannot do in-house that is somewhat special.  I blast out billet parts all the time and sometimes barely pay attention to them where non-machinists are blown away.  Yet opening the box and getting these cast parts, which are much less accurate and have less bling factor than a nice billet part, was really exciting!  Maybe because it means that a rolling chassis is not too far away, maybe because it's just another cool motorcycle part, or maybe I just got up on the right side of bed today, but I'm happy.

We can see that there are an odd number of parts.  Apparently they had one investing failure during the process and that part didn't make it.  He's gone.  And there was nothing we could do.  This is normal for a first time running parts and since I was hoping to get 50% success actually getting over 80% is great.  My plan is to machine 2 sets and leave the rest as is in case there are modifications that are needed.

The shot below really shows the progression of the part from concept to production.

The leftmost shot is the swingarm area of previous designs.  There's a lot of thinking involved between steps 1 and 2! 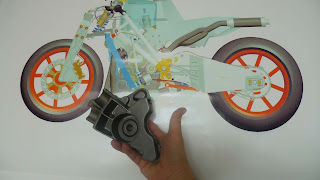 The gold part this is where this piece goes in the overall scheme of things.


The parts have great surface finish and in the next few days I'll do some 3D scanning and 2D inspection to see where, if at all, the parts deviate from nominal. 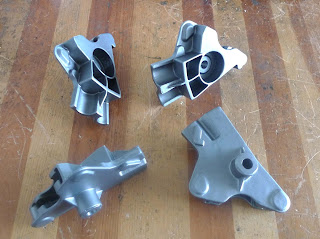 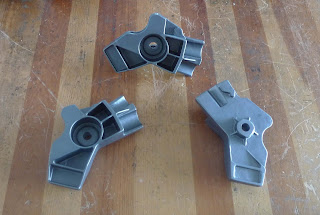 That's all for today.


Chris
Posted by coseng at 4:56 PM No comments: Links to this post

The Box came in.  The box cutter came out.  The phone rang.  That was the end of my bike time for the day.  Damn.  Will resume tomorrow with a detailed examination. 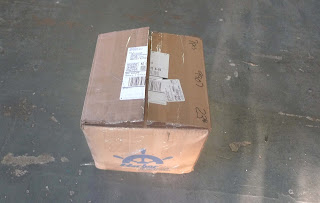 Chris
Posted by coseng at 7:55 PM No comments: Links to this post