While taking the engine apart it is nice to look around the insides and see what clever details the Ducati engineers have figured out.  Of the two major changes in the engine design that were implemented in this new engine, one is nearly invisible and one is highly visible:  two stage oil system and chain/gear drive camshaft actuation.  I will review the oil system in this post.

The oiling system underwent a major redesign for this engine.  I would describe it as a hybrid dry/wet sump system.  The crankshaft cavity is well sealed similar to a two stroke crank area.  It is so well sealed that it is difficult to turn the crank by hand, even with both cylinder heads off!  You can hear the blowby similar to a compression stroke on a fully assembled engine.  This is not a problem during actual operation because you can see the new crankshaft scavenge stage is much larger than the pressure stage so during operation there would be a low vacuum in the crank mains area. 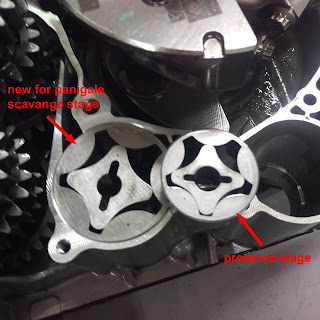 The oil pump works as shown in the attached image, the output of the scavenge serving to oil the trans before draining to the sump.  It is a clever design that makes the most of the pumping action of the scavenge stage and gives the return oil plenty of time to deaerate.

The sump then has a direct line to the intake of the pressure stage, then out to the fine filter, then into the oil galley to feed the rest of the engine.  Camshaft oiling is similar to the previous designs with the addition of line running to a hydraulic cam chain tensioner for each head.

One feature I am unsure of is on one end of the transmission output shaft.  It is a small roller bearing and there is a 6mm hole drilled in the crankcases that nothing goes into and is obscured by the clutch primary drive gear. 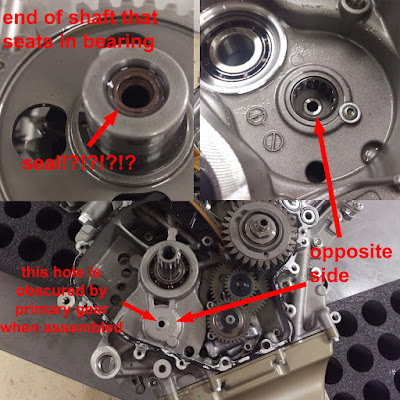 What I am unsure of is that that end of the transmission shaft has an oil seal installed.  There does not seem to be anything that goes into the seal so I am baffled as to it's presence.  Anybody have ideas?  There is no access to any other parts of the oil system through this bearing pocket or the rest of the trans shaft.
Posted by coseng at 7:23 PM